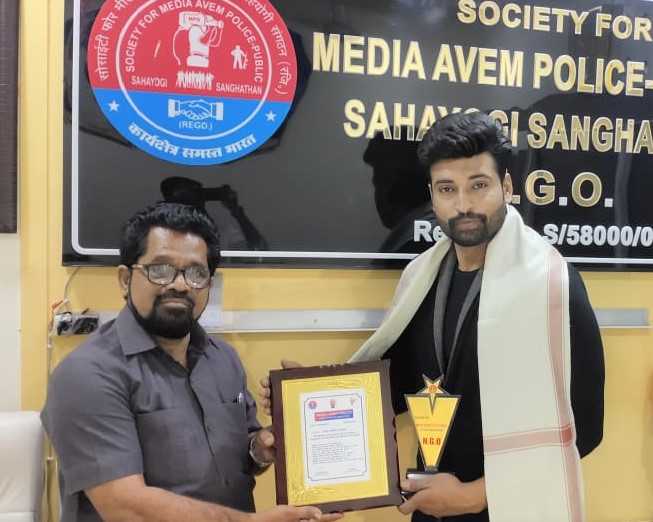 Surat: On the occasion of the birth anniversary of Sardar Vallabhbhai Patel a grand function was organised by the “Media Evam Police Public Sahayogi Sangathan”in the office located in Dindoli in Surat (Gujarat) on 31 October 2020. In this function multi-talented film actor Rangshahi was felicitated with a Trophy and a scroll of honour, for his commendable work in entertainment world, at the hands of organisation’s President Dilipbhai N. Patel. On the occasion Gujarat State Vice President HM Patel, Maharashtra State President Harshad Makwana, Treasurer Lalit Jain, Trustee Ketanbhai Chunwala, Dinesh Wadher and officials and members of the organization and others graced the occasion.

Rangshahi hails from Indore in Madhya Pradesh. Well known Director Anil Sharma’s brother Producer Anuj Sharma, had engaged two heroes for his film “Ishq Junoon: The Heat is On”. Rangshahi was one of the two heroes. The film was hit and the producer liked the work of Rangshahi. That is the reason Producer Anuj Sharma has signed multi-talented actor Rangshahi as the main hero for his upcoming film being produced under the banner of “Shantketan Entertainment ”.Besides this, Rangshahi has appeared in several advertisement films. Recently he also did a film in South, which will be released soon. A resident of Indore in Madhya Pradesh, Rangshahi is the son of former DCP Ashok Rangashahi.