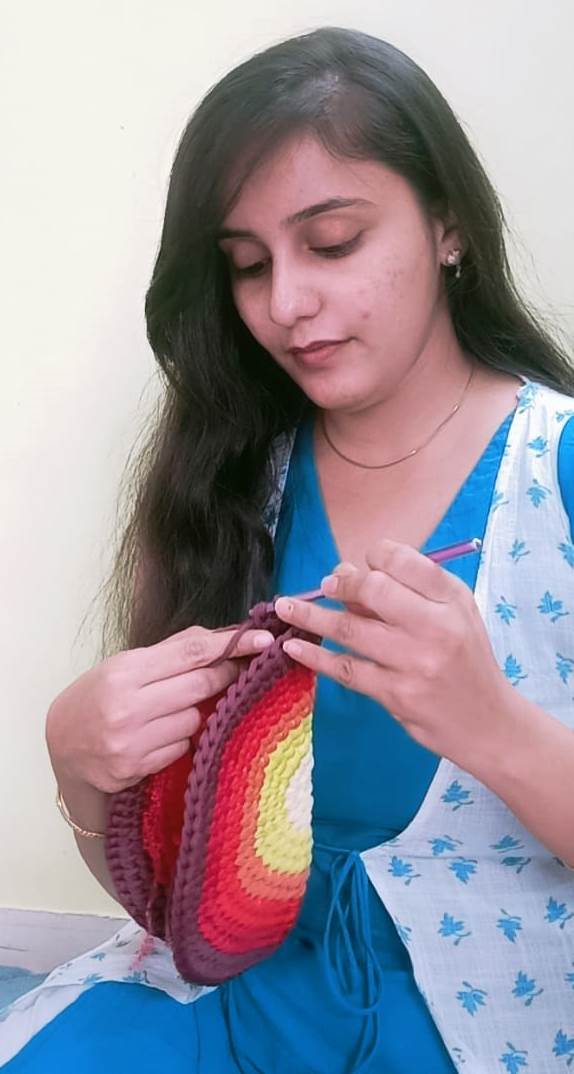 Jaipur,  The famous Crochet Art Workshop  from the Union Territory of Daman  was organized free of cost on the Rooftop App for the Artist Community of India and Rajasthan- 'The Circle' on Friday. The workshop was organized under the initiative Azadi Ka Amrit Mahotsav - Celebrating India @ 75 in association with the Rajasthan Studio. The workshop was conducted by a young artist from Vadodara(Gujarat)- Sakina Challawala.
While introducing the Crochet art form, Sakina highlighted that in the Union Territory of Daman, crochet and lace work are taught by mothers to their daughters as an important  domestic skill. This craft is also mandatorily taught in Daman's schools. Portuguese and Christian women are popular for their crochet, shadow work, cutwork, satin stitch, cross stitch and log stitch embroidery.
It is noteworthy that the crochet craft originated in the 19th century with the use of hooks instead of needles. This art further developed into chain-stitch embroidery. There is no foundation material in crochet work. In this artform, design is made with loop and interlink chain using the thread with hook to aid.
About The Circle Community:
The Circle Community by Slo Mo Experiences has been started as an invite-only community of artists. In these free sessions and workshops, like-minded artists not only engage in intense artistic talks but also come together on a platform to learn and share different art forms and to introspect.
About Celebrating India @ 75: Bulaayein Bharat (India Calling):
A celebration of India's traditional arts is being created by Slo Mo Experiences under the 'India Chalk' initiative, as part of the Azadi Ka Amrit Mahotsav organized by the Government of India on the occasion of the 75th year of India's independence. Under the initiative Bulaayein Bharat, selected traditional artists from around the country gathered to celebrate these nation-building efforts. This initiative started on 15th August 2021 and will go on till 15th August 2022. 44 paintings based and 31 craft-based art styles were presented in this specially curated virtual art experience. Apart from these, 26 other important local art styles had also been included in it.
About Rajasthan Studio:
Rajasthan Studio is the world's first and only unique online platform that provides hands-on experience of various art styles under the guidance of master artisans from Rajasthan. Rajasthan Studio connects art-lovers, domestic and foreign travellers, professionals and students through individual and corporate workshops to artisans of Rajasthan who have been awarded by the State and Central Government, Lalit Kala Academies and Padma Shri.
About Rooftop App:
The Rooftop App has been launched by Rajasthan Studio with a vision to make it easier for art lovers across the world to access various Indian art styles. The workshops organized on this app allow art enthusiasts, who are fond of traditional Indian art styles, from across the globe, to view pre-recorded sessions and also  set their own calendar for attending the upcoming workshops schedule. This app can be downloaded from Google Play Store and iOS platform.