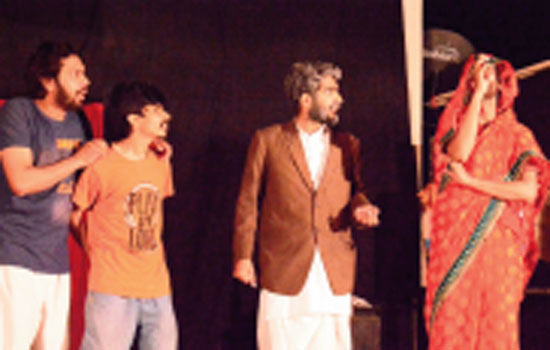 Udaipur: Natyansh society of dramatics and performing arts, Udaipur celebrated its 9th foundation day by organising a theatre evening. The play "Shyamkali ka Jaadu" was stagedonthisoccasion.Intheperiodofeight years,Natyansjh has organised six National theatre festivals ‘Alfaaz’ and is continuously conducting ‘Taarash’acting workshop to spread theater arts among children and teenagers. Team has also more than 6000 nukkad natak and 25 full length stage plays have been performed in many parts of the nation. On March 7, "Shyaamkali ka Jaadu" wad staged, which celebrates the most amusing days of students hostel life. This play is written by Dr Pradeep Kumar. About the play- This play revolves round three friends Amar, Prem and Shyam who are worried about hostel rent. They haven't paid their rent for the last 2 months and are figuring out a way to avoid paying their rent and vacating the house. They plan on impressing their landlord's daughter. Two of the guys, Amar and Prem, rehearse on impressing Ritu (landlord's daughter) with Shyaam's help. While both the guys are busy enjoying their landlord walks in and catches Shyaam who is dressed up as a girl. Due to Shyaam's colorful tricks as a girl the landlord falls for Shyaamkali and dreams of marrying her throughout the play. All these instances are a source of laughter in the play. Program coordinatorAmit Shrimali informed that this play is written by Rajasthan's play writer Dr. Pradeep Kumar and is directed byAshfaq Noor Khan Pathan. The artists Raghav Gurjargour, Agastya Hardik Nagda, Mohammad Rizwan Mansuri, Mahesh Kumar Joshi and Chakshu Singh Rupawat won the audience's hearts by their amazing performance. Stage operations were done by Neha Shrimali. Music was operated by Fiza Batra. Light setting and direction was done by Ashfaq Noor Khan Pathan. Stage decorations were handled by Sarita Pandey, Daud Ansari, Dheeraj Jinger, Mayur Sharma, Mahavir Sharma, Piyush Gurunani, Raman Kumar, Yash Sakdhvipiya.