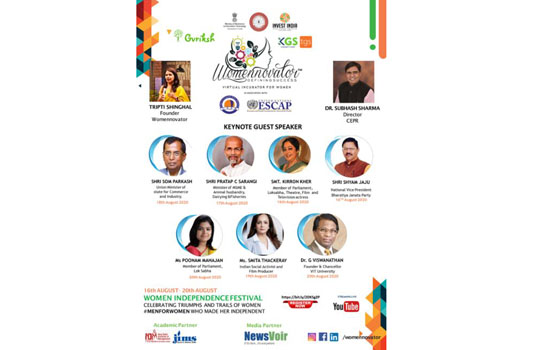 New Delhi : Womennovator celebrated the Women Independence Festival and invited dignitaries, sectors/city influencers, and awardees to celebrate the Aatmnirbharta of women: to salute men and women who have abetted their journeys; and to acknowledge the need of a support system like the Womennovator to achieve her true potential. Womennovator is building one of the largest pipelines of future women leaders, professionals, social activities, and entrepreneurs.

The five-day Women Independence Festival began with the inauguration ceremony followed by the launch of the WomenMark (a blockchain and artificial intelligence-driven e-commerce platform with over 2000+ products and services by women), and the WE Fund (an incubation fund for women entrepreneurs); panel discussions, fireside chats and the announcement of over 70+ Woman Face Awards 2020.

Tripti Shinghal Somani, Founder, Womennovator & CEO KGS Advisors LLP shared that the idea and theme behind this program - celebrating men for women and women for women. To make women financially independent and empower them with a virtual platform with thrust on the women from Tier I and Tier-II cities. Our core objective is to train and deploy individuals (from local communities) to guide women in their professional journey and help them avail myriad government schemes available. She emphasized that we have to step out of their comfort zone and stop taking pride in just raising their kids, it’s time to become a responsible citizen and contribute to the GDP growth – in making India realize its five trillion-dollar economy dream.

She mentioned that through Womenmark, we are trying to extend all the possible help for these women to kickstart their careers and generate revenues in these challenging times. It provides a complete digital platform and directly connects buyers and sellers to do businesses. An integrated CRM, Marketing, Funding, Payment & Logistics system helps women entrepreneurs to execute and accelerate their business operations.

Dr. Subhash Sharma, Director, CEPR shared his vision and stated that India can become self-dependent if our women are self-dependent and the daughters of our country are provided with quality education. The New Education Policy with thrust is in girl child education focuses on developing academic and employee-oriented skills in women. It is the responsibility of men to support women and make sure that they reach great heights. E-commerce business is flourishing and has tremendous scope in years to come. However, some MNCs are resorting to techniques like Deep Discounting and Predatory Pricing, which can hinder the growth of women entrepreneurs due to paucity resources and the availability of cheap capital. If we want women to flourish, we need to keep a check on Deep Discounting and Predatory Pricing.

The Chief Guest for Day 1, Smt. Kirron Kher, Member of Parliament and a renowned actress said that everything starts from your childhood and depends upon how much your parents support and encourage you. A woman has a vital role as a homemaker as she has to take care of everyone and even make her children become a good citizen. She can do so many things if only she has the encouragement from the menfolk in the family. Women should support each other without personal politics because they have immense talent that cannot be wasted. Women in rural areas are doing very well. They are pooling in resources and doing an incredible job.

Shri Pratap Sarangi, Minister of MSME & Animal Husbandry, Dairying & Fisheries, said once Swami Vivekanand was asked: "What do you think about the future of women? To which he replied " Am I a woman that you are asking me such questions? Am I Lord to dictate the future of women? Women create their own future. They can support themselves.” Women are not supposed to just sit inside the four walls of their homes. They have proved their excellence in every field whether it is teaching, science, or even warfare. We can no longer discriminate based on gender. In ancient times, women were considered holy. Devi Durga represented the Defence Ministry.

Shri Som Prakash, Union Minister of State for Commerce and Industry stated that, in our country, women have contributed and played a vital role. They have reached all heights - they have been a Prime Minister or President or even a strong Opposition Leader. In the current times, women should have at least 50% participation in all fields, though, he feels that we are living in a male-dominated society. Men think they are superior to women. We have launched many initiatives for women and rolled out policies for women to accomplish great heights, now they have to make the efforts to build their own identity. We should support women regardless of anything. A bill was introduced in the parliament in 1996 to have at least a 33% reservation for women in the Lok Sabha.

Ms. Poonam Mahajan, National President of Bharatiya Janata Yuva Morcha, Member of Parliament, GOI, shared her father’s belief that knowledge needs to be acquired from one’s culture, mother tongue, and surroundings. Family support is one of the major keys to an individuals' education. She talked about a question that she asked as a child from her father that confused him - "Why HE is he and SHE is she?”. At that time, she couldn't understand what he said but, now she knows that the 'S' in the SHE means that SHE for superior to HE.

Ms. Meeta Sengupta, Renowned Educationist believes that Womennovator is an enabler for women, and to build support systems and mentoring networks is a journey. We come across women who have lifted themselves and others up over these years.

Mr. Pramod K Sinha, Womennovator (an initiative of Gvriksh-Go Green) led by Ms. Tripti Somani and a team of professionals have come up with unique opportunities and a platform for emerging Women Entrepreneurs. In a short span, it has emerged as a powerful tool and talent pool to change the face of Women. It has provided access to Women Mark: Blockchain & Artificial Intelligence-driven “Market Access Platform” for Women and WE Fund: For Women & by Women investment in Women-led Ventures.

Ms. Archana Gupta, Non-Executive Director, KEI Industries Limited. said that she started her journey of becoming a successful entrepreneur from a housewife - now she is contributing to the GDP of the country. After being a housewife for many years, she felt the need to do something meaningful in her life. And with the support of her family, she has achieved new heights and successfully turned a loss-making plant to a profit-making unit that is now self-sufficient.

Mr. Anil Khaitan, Former President, PHD Chamber of commerce and industry, shared that, "We've always said that behind every successful man, there is a woman.” However, in the current era, “Behind every successful woman, there is a man". New India is emerging - new India is not just urban pockets of India but the country as a whole. We need to see how the real India is emerging. The best thing about the New Education Policy, if implemented in the intent and sense with which it has been designed, has the power to change mindsets.

Prof. Ashutosh Sharma, Secretary, Department of Science and Technology stated that the representation of women in the engineering domains is very less and the rate of growth has been slow - over the last 40 years, we have moved from a 3 percent representation of women in the engineering sector to a mere 10 percent. He also talked about the problems faced by women during their schooling years that affects the selection of their careers. He expressed the need for women to have a career as a scientist and talked about the various women-oriented schemes launched by the DST like WOS-A, WOS-B, and WOS – C.