The painting of Udaipur painter Dr. Nirmal Yadav was selected 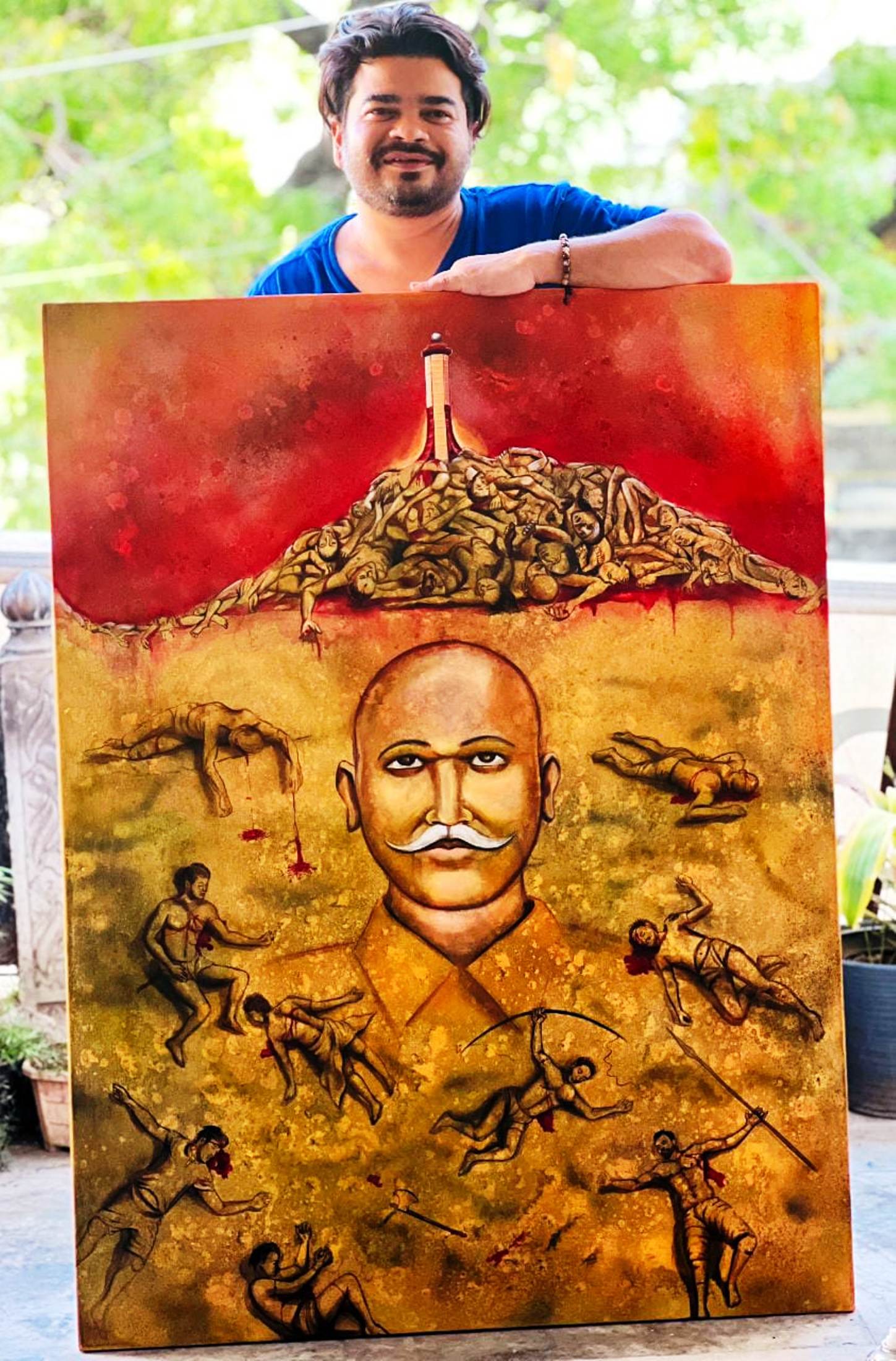 Udaipur. Whose history has little information? The National Academy of Lalit Kala, Delhi, took steps to help the artists during the Corona period. The Akademi organized an online National Painting Camp from 19 to April 24. The theme of the camp was From Independence to Independence under the Amrit Festival of Independence, under which painters were to depict their local anonymous freedom fighters or events through paintings. On the initiative of Vice President Nandlal Thakur, 100 eminent painters from across the country were selected for the camp.
Nirmal Yadav made a painting on the Mangarh massacre of Banswara district and Vashishth under the title Satya Arth Prakash. In this, painters Dr. Nirmal Yadav and Dr. Dharamveer Vashistha were selected from Udaipur. The Lalit Kala Akademi will display the paintings of the artists.
Dr. Nirmal Yadav said that Minister of State for Parliamentary Affairs and Culture Arjun Lal Meghwal launched the camp online. All 100 artists, including All India Organization Minister Mukul Kanitkar, Lalit Kala Akademi President Uma Nanduri, Secretary Ramkrishna Vedala, and Suman Majumdar, were present.
This is the Mangarh massacre.
Mangarh massacre is the incident of 1913. It is also called the 'Jallianwala Bagh' massacre of Rajasthan. In 1500, innocent Gurubhakts were killed.
There would hardly be any Indian who would not have known about the incident of the Jallianwala Bagh massacre that happened on April 13, 1919. This incident has been a massive chapter in India's freedom struggle book. Many ordinary people were affected by this incident and decided to get into the freedom struggle. According to the British government, 379 people were killed, and more than 1200 were injured in this massacre. But according to the then newspapers, there was no fake news; the death toll was around 1000. A similar painful and gruesome massacre happened in southern Rajasthan as well. It hid under other events in the pages of history. This massacre was more significant than the incident in Jallianwala Bagh.
We are talking about the 'Mangarh Dham massacre' that happened six years before the Jallianwala Bagh massacre. The date was November 17, 1913. Mangarh is the name of a hill where this incident took place.
Govind Guru was the hero.
Govind Guru was a social worker and used to work to awaken the light among the tribals. He started a movement in 1890. The purpose was to make the tribal-Bhil community aware of vegetarianism and remove the addiction spread among these tribals. This movement was named as Bhagat Movement.
On November 17, 1913, Major Hamilton, along with his three officers and princes and their armies, surrounded Mangarh hill from all sides. What happened after that shows how harmful the existence of power is to the senses? Guns were mounted on the mules; they were made to go round the hill so that more and more people died. More than 1500 people were killed in this incident, and many were injured. Govind Guru was again imprisoned; however, he was released from Hyderabad jail due to his popularity and good behavior in jail. His colleague Poonja Dheeji got the punishment of black water. Apart from these, 900 other people were also arrested.
version
“In this work, I have depicted the horrific massacre, how the British Army fired non-stop, and the bodies of those innocent tribals were piled up. Whose number was more than 1500? The pile of the dead bodies of the tribals has been given the effect of the hill of Mangarh, and in the same way, I have made a portrait of Govind Guru looking at it with soulful eyes as a monument built there in tribute to these tribals. Through this work, I am making the viewer feel the horrific situation of that time, how mercilessly the British power came to dominate humanity".