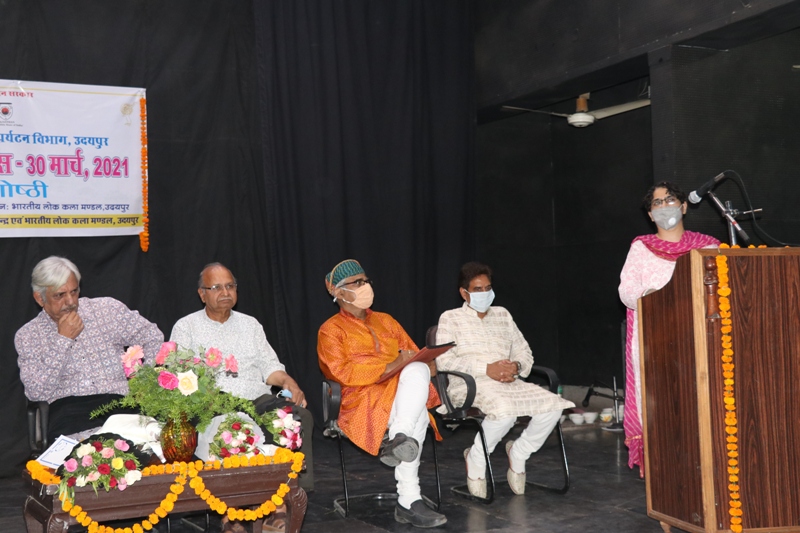 Bhartiya Lok Kala Mandal,  Department of Tourism, Government of Rajasthan and District Administration, Udaipur under the auspices of Rajasthan Day organized  many activities including seminar, folk dance, folk singing concerts and theater performances.  According to Director, Bhartiya Lok Kala Mandal  Dr. Laique Hussain seminar on  "Rajasthani Art and Culture" was organized in the afternoon .Shri Phool Singh Meena, MLA Udaipur (Rural) was the chief guest at the seminar. Describing the art culture of Rajasthan as India, he said that Rajasthan is the only state in India which is known all over the world for its art and culture. Shri  Bhanu Bharti, distinguished  Theatre Director, emphasized on the  richness of art and culture of Rajasthan. Giving instances of folk dance, folk tales, folk music, languages and traditions ​​he described the uniqueness of Rajasthan. In present times, there is a need to facilitate and preserve it. Noted painter Dr.Shail Choyal told that traditional painting of Mewar is famous not only in India but all over the world but it  it is neglected  here. This rich heritage should be protected and promoted through museums, workshops and camps. Dr. Lalit Pandey, noted historian highlighting the origin and cultures of human civilization said Rajasthan has not only been rich in language, literature and folk culture, but it has also been rich in abundant metal and mineral wealth. Famous Mime Artist and Folklorist Vilas Janve said that the Langa Manganiar musicians and Kalbelia music and dance and traditional crafts of Rajasthan have left its indelible marks on the art and cultural scenario of the World. He suggested inclusion of cultural activities in School curriculum and regularly organizing Folk Festivals involving local arts, crafts and cuisine. conserve culture. Dr. Laique Hussain said that museums play an important role in promoting and spreading folk arts to a new generation, so more and more such museums should be established in Rajasthan. On this occasion, Shikha Saxena, Deputy Director, Tourism Department, while expressing gratitude for the participants of seminar, said that the people at large must be encouraged to respect culture of Rajasthan. An evening concert of Rajasthani folk songs  by Langa muscians,Tera Tal,Chari , Bhavai and Ghoomar dances enthralled audience. Pawari Dance Team of Gujarat added colour to the concert.
The folk performances were followed by Solo drama performances by Epilogue Theater Society, Jaipur. Directed by Sunita Tiwari Nagpal, Young actors namely  Hemant Gautam,Saud Niyazi and Ramgopal presented three stories.  The first two stories Ravi Ke Paar and Seema were creation of Gulzar Sahab while the last story ‘Toba Tek Singh’ was by Saadat Hasan Manto. All the plays were brilliantly designed and directed by Sunita Tiwari Nagpal.