'Bandook' The journey from destruction to peace 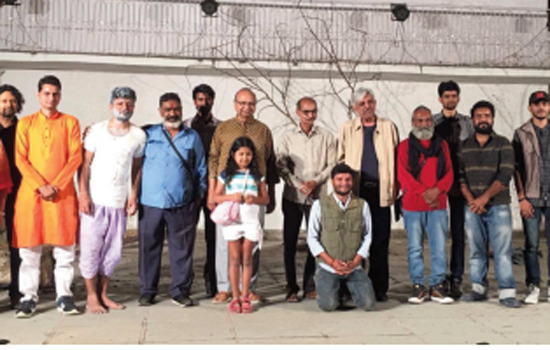 (Team Natya Sanstha paid homage to the founder ) Shri Ri zwan Zhaeer Usmaan through his vibrating script,,, Bandook.It was his 7th death anniversary to remember his work by his followersofTeamNatyaSanstha. Team Natya Sanstha was established by two of the keen Art lovers of the town,, ShriRizwan Zaheer Usmaan ,andShriShailendraSharma.It is working in the field of theater since 1970 and was registered in 1980.It has performed almost all over the country and won so many recognized awards too. The play'Bandook' was played on the open air theater at Shramjeevi college on 10th of November 2019. It was witnessed by legendary audians of our city of lakes who made us proud wh o l e th r o u g h th e nation.Among them formar ChairpersonofNationalschool of drama ,Shri Banhu Bharti was present there,,he is a well-known name in the field of Performing Arts. Shri Shail Choyal also accompanied him,,a maestro of colors and cenvas , renowned name for ArtloversofUdaipur.Towitness the show there was also present Miss Geeti Sen a distinguished art critiqueandartloverwho is an author also.Vice Ch a n c e l l o r o f Janardan Ray Nagar Vidyapeeth shree S S Sarangdevotwasalso present there to witness the play. 'Bandook' is still a hand written script by Ri zwa n Za h e e r Usmaan who was so keen to portray reality of common people's lives in his own way.Here in this play he successfully tries to prove that weapons are not the solution of any problem in the world.Weapononlyknows distruc tion.It i s it' s bas i c nature,,,you can't construct anything by weapon. If you have one,,in the height of your anger you will definitelyusethat,,astheangry mind doesn't think of any consocquense or after effects of any action done during this temperament.Here he proves th a t o n e wh o own s a weapon,,becomes slave of that ,,and act accordingly.. The only way to establish peace in the world for true human beings is to melt all the destrcutive elements from the society and replace them with something which soothes our ears and fill melody,,love and peace to our hearts and lives.The playwas directed by one of the established director of new generation Suneel Tank. The story of the play Bandook roams around two charactersonly.Oneisayoung person who inherents a gun from his ancestors and another one an old man who has the responsibility to engrave the name of the new owner of the gun.Here the young man is a Peace lover yet he uses the gun to kill some innocent people.Now he is in deep guilt,,,so much unhappy of himself. Wants to get rid of the gun,,but the gun is not leaving him,,,it's like he is fighting with his own thoughts,,he is becomingrebellionagainstthe system he inherited from his forefathers.. At the end of a meaningful discussionbetweentheyoung and the old characters of the play comes a enlighten moment were the old man melts it and creates a melodious flute out of it,,to spread sweetness, Harmony and a love full peace through out the world. The cast and crewis as follows. Imaginationoftheplaywas d o n e b y Sh a i l e n d r a Sharma.The character of young man was played by Mahipal Singh Rathore and Sumit Raj Purohit played as the old man. Make up and lights were done by the assistant director o f th e p l a y Si d d h a n t Bhatnagar.Costumes were done by Pushpendra Singh Solanki,Musicwasarrangedby Akhilesh jhaa and Jigar Joshi and back stage was hold by Naman Jain and Mukesh Meghwal.The play was witness by Rizwan Sahab's family too.It was jointly organised by Team Natya Sanstha and Shramjivi College Udaipur