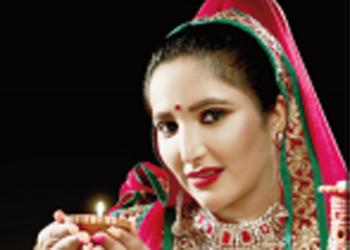 KressySinghwhois from Bareilly ( Uttar Pradesh ) will be seen very soon in her debut single song Diamond Ring,didherfirstphotoshoot for Diwali Festival in Mumbai . Starting off as an air hostess, Kressyhasaninterestingjourney intotheglamourworld.Hailing from Uttar Pradesh, Kressy did her cabin crew training from Frankfinn InstituteAir HostessTraining, Delhi and took to working for airlines for a good two years. However, it was her ever lingering dream of becoming a model and actress that got her to wrap up from the airlines and take to modeling! "I have been a film buff since childhood and always dreamed of becoming an actress. I am glad I realised my dream and pursued it sooner," says Kressy chirpily. She also want to do good work as actress in TV and film.