Bounce salon will enhance the beauty of Udaipur residents: Sonali 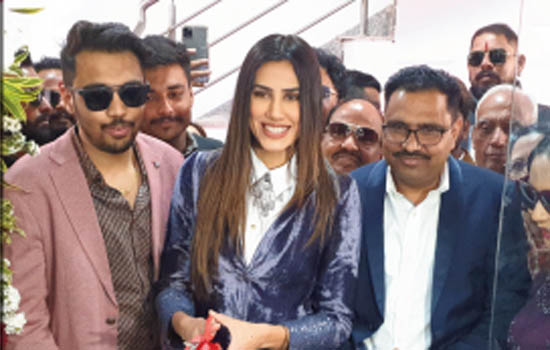 Udaipur: Pyaar Ka Panchnama film fame Sonali Sehgal inaugurated the second branch ofthecity's largestbouncesalonandmakeover studioinSukhadiaCircleonSunday.Thousands of fans thronged outside Saloon to see their favoriteartist.Sonalialsotookaselfieformany things with her, keeping the heart of her fans. MayaChaudhary,Directorof Bounce, said that Sonali, who reached Udaipur, visited the Salon after inaugurating the Salon and praised the balloon sayingthatthebouncehasbeen made exactly like a convenient balloon on the big side of the metro city, with professional staff second branch of Bounce Saloonwillsoonbecomethefirst choice of everyone. During the inauguration on Saloon, a 50 percent discount was given on all types of Saloon service for the residents, people also took advantage of this offer. After the inauguration, Sonali, who arrived on the grand stage outside the bounce to meet herfans,waswelcomedbyDholNagado.Sonali also thanked many of her fans for welcoming them, during which Sonali was welcomed with bouquets by the Chaudhary family. Sonali stayed with her fans for about 40 minutes and talked to them very closely. Sonali's fans, and especially the youth, were vying to take photographs and selfies with her. Sonali said the city of lakes is the most beautiful city in the world. The beauty of this place mainly attracts her. She also said that he wishes that he get married in Udaipur itself. MayaChaudhary,DirectorofBounceSaloon &MakeOverStudio, saidthatUdaipurites,who are always crazy about theirlook, will get every facility that is available in metro cities on BounceSalon.ForBouncywomen-men,boys, and girls, all facilities of makeup such as makeup,hair cut, sareewrapping,nailart,eyemakeup will be available in a fully air-conditioned salon. A hairstyle, hair cut, bridal makeup, makeover, airbrush makeup, HD makeup, eye makeup, and all kinds of facilities will be available exclusively for women. All types of hair cuts and tatoo will be available for boys. Branded products of companies will be used Hair, makeup, eye makeup, nail art, saree wrapping, etc. will be provided at the Salon by more than 20 skilled staff from different states across India. Along with this, only the original productsofTempforNaryak,Make,Crylo,Bobby Brown, and other branded companies will be used on Salon. In particular, companies such as Laurel,Vela, have trained internationally on hair technician salons.