Wedding of 47 disabled and poor couples 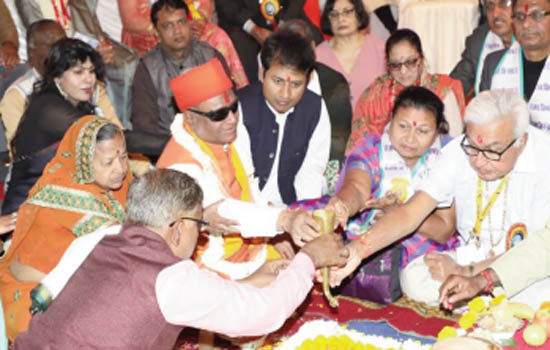 Udaipur: Divyang and poor families whose young men and women never imagined about their married life got married in a royal manner. with the assistance of Narayan Seva Sansthan The traditional ceremony of Toran was performed at 10: 15 am in Seva Mahatirtha the campus located in Leo Guda of theSansthan.Earlier,theinstitutefounderPadmashreeKailash 'Manav' co-founder Kamaladevi, president Prashant Agarwal, Vandana Aggarwal lit the lamp and inaugurated the marriage festival. Distinguished guests Monica DeviSpain,KunwarBhai Mombasa,Anand Kumar Orissa, Kusum Gupta Delhi, Kamala Devi London graced the ceremony. On this the occasion, the founder Padmashri Kailash Manav welcomed the young people and the guests and said that the work of the people and the poor who had accepted life as a misfortune by giving their wings to the establishment of their families and laying the foundation of a pleasant life in the last 16 years Is doing with So far about 2000 Divyang and poor couples have been settled. Institute President Prashant Agarwal told that the institute conducts mass marriages twice every year. This time out of 47 couples, there are 5 such persons who are Divyang, while there are 7 pairs in which there are 1 Divyang and the second one is normal In the presence of hundreds of people, the bride and bridegroom echoed with applause when they put a garland on each other's neck on the hydraulic stage. People were showering rose petals on them. 47 altars were erected at the wedding venue for the seven rounds of marriage.Acharyaswerepresent at each to perform the rituals of worship and rituals along with incense. Apart from the rounds, a phera was also taken with the promise of Beti Bachao Beti Padhao. Institutes and guests from different states of the country gave almost all the goods that are needed to build a new household. Mandalata Singh, Deputy Director of Social Justice and Empowerment Department provided checks of financial assistance to each couple from the state government. Free artificial limbs and accessories were also distributed to about 50 Divyang at the ceremony. After the marriage was over, all the guests of the newlyweds bid farewell to the moist eyes, blessing them for a successful household. Theparents thankedtheinstitutionwhosepovertywas coming in the way of marriage of the children. All these couples weretransportedfromthevehiclesoftheinstitutetotheirhomes. Mahim Jain conducted the ceremony