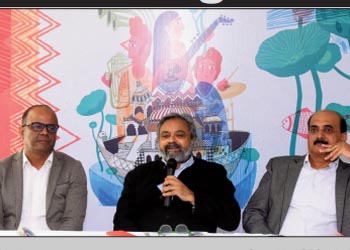 Vedanta Udaipur World Music Festival, India’s biggest world music extravaganza, will be held this year from 7th-9th February in the beautiful city of lakes. The fifth edition of the festival will witness the presence of over 150 renowned musicians from over 10 countries including Spain, France, Switzerland, Kurdistan, Iran/ Lebanon,Portugal,Indiaandmanymore. Withafootfallofover50,000peopleevery year, the festival is one of the biggest performing arts attractions in the country. After 4 successful years and association with Vedanta Resources & HindustanZinc,theUdaipurWorldMusic Festival has tied up with Hindustan Zinc, a Vedanta Group company, as the Title Sponsors,andthefestivalwillhenceforth be called Vedanta Udaipur World Music Festival. A Press Conference was held at the HeadOfficeofHindustanZinc inUdaipur in the presence of Mr. Sunil Duggal – CEO, Hindustan Zinc, Mr. Swayam Saurabh – CFO, Hindustan Zinc and Mr. Sanjeev Bhargava, Founder Director – Seher india, where the festival was formally unveiled. Mr. Sunil Duggal said: “With the Vedanta Udaipur World Music Festival, we want Udaipur to be identified as the cultural capital of India. Hindustan Zinc has always been a frontrunner to promote such diverse forms of art and culture, and this makes a great setting for the theme of this edition as well – Unity in Diversity. Hindustan Zinc aims to promote the culture and a plethora of art forms, while making this edition of the Vedanta Udaipur World Music Festival an even bigger success than the previous editions.” Mr. Swayam Saurabh said: “HindustanZinchasconsideredaresponsibility to promote the culture and art of Udaipur. Vedanta Udaipur World Music Festival is one of the biggest platforms that supportsour visionofpromotingculture and we are very proud to have associated with this.” Mr. Sanjeev Bhargava said: “It is the time of year when music from across the globe sets its feet in India and presents a unique amalgamation of culture, tradition, language and thoughts. We are elatedtobringthefiftheditionofthisunique andmostawaitedmusic festivaltomusic lovers where one can enjoy all genres ofmusic.This festivalalsogives chance/ platformtolocalartistestoshowcasetheir talent.The success of this festival in past years has grown immensely andwe look forwardtotheguestattendingandenjoying this year’s performances as well.” Throughplannedcuration,on-ground events and artiste interaction, the festival will be a microcosm of a diverse yet unified world. Spread over three picturesquevenues,itoffers immensediversity in music that celebrates different moods of the day right from a morning meditative raga to personifying romantic music at its best played beside the lakesintheafternoons.Eveningswillbring spiritedyouthfulmusic thatbrings together people of all age groups. Besides, the festivalalsofeatures localRajasthanitalent. Thefestivalfeaturesunparalleledlive performances and celebrates cultural diversity at its best. In a time where we must embrace diversity, the fifth edition is built around the concept ‘We are the World: Unity in Diversity’ and as such emphasizes the need for spreading love & the message of unity in diversity through music. The festival in its 5th year is also dedicated tothecelebrationof150yearsofMahatma Gandhi. The Vedanta Udaipur World MusicFestivalwill commencewithaspecial Invocation and Dedication curated forthisinauguraltributetoBapuandMartin Luther King Jr, celebrating 150 years of MahatmaGandhibySudhaRaghuraman (India) and Jeffrey Mpondo (France ). Thefestivalfeatures6venues spread across Udaipur city, which include Welcome concerts at Maharana Pratap Airport & Udaipur RailwayStation for a showcase of undiscovered Rajasthani artists and a Workshop at MMPS School for the students of Udaipur. The main stages are: Morning:MajhikaGhat(AmbraiGhat) *Entry through Passes only Afternoon: FatehSagar Paal *FREE ENTRY Evening: Gandhi Ground *FREE ENTRY The festival received a special coverage in CNN Travel Trends in March 2019 which was witnessed by over 354 million households in 200 countries, endorsing the festival as one of the biggestdestinationmusic festivalsofthe world. This year will witness performances by diverse artistes such as Ginni Mahi (India), Sudha Raghuraman (India), WhenChaiMetToast(India),MameKhan (India),ThaikkudamBridge(India),Habib Koite (Mali), No Jazz (France), Oques Grasses (Spain), Schnellertollermeier (Switzerland) among others.