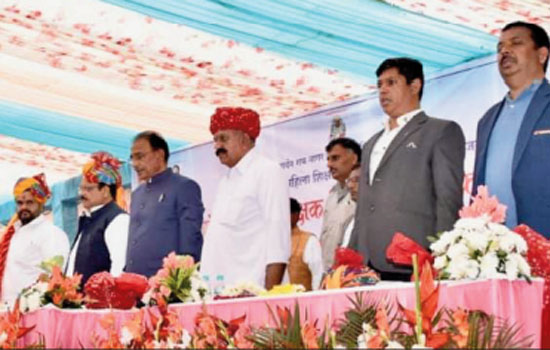 Ajmer: Medical andPublicRelations Minister Dr. Raghu Sharma said that the youth's ethos should have been dedicated to the great men of the country like Pt Nehru and their whole life struggle for freedom,unity,andprogressofthecountry. Today, unfortunately, facts are misleading on social media. The condition of the country's economy is Odd in the situation. Policymakers meeting at the center should work to improve the situation.MedicalMinisterDr.RaghuSharma inaugurated the development works at Janardan Rai Nagar Rajasthan Vidyapeeth Haribhau Upadhyay Women's College in Ajmer. |. He said that in the present condition of the country, the youth should learn from the lives of great men like the first Prime Minister of the country, Shri Jawaharlal Nehru,Shri JanardanRai Nagar and Shri Haribhau Upadhyay,NehruJi spent 12 years of his life in jail. Pt.Neherumadethecountry economically social, educationally and technologicallyprosperousas Prime Minister. The present form of the country is due to the sacrifice of ourmassheroes.Hesaidthattodaypeoplearebeingmisledby twistingfactsand history through social media. Youth should avoid such misinformation. The country faces thechallengesoftheeconomy, unemployment, and other challenges. Policymakers sitting at the center shouldfocusonresolvingtheseproblems. Dr. Sharma said that the development of society is possible with the empowerment of women. Former Prime Minister Shri Rajiv Gandhi amended the Constitution to provide reservation to women in Panchayati Raj and civic bodies. UPA President Smt. Sonia Gandhi is also making efforts for 33% reservation in Parliament and Legislative Assemblies. The state government is working seriously for the upliftment of women. The Medical Minister said that Rajasthan is the first state in the countrywhichisgoingtogivetherighttohealth tomorethan7crorepopulation.Ourmedicalespecially freemedicineandscreening scheme is the top in the whole country.Action will be taken against any doctor in any hospital if he writes medicines outside the hospital. NationalSecretaryShriDheerajGurjar said that society will progress only with theadvancementofwomen.Onlyaneducated society moves forward. He urged the Medical Ministerto remove the problems of the college. The Kul pramukh & chancellor of Rajasthan Vidyapeeth, B. L. Gurjar informed about the progress of the institute in his speech he stressed the need the all-time development of women in society while paying floral tribute to HaribhauUpadhyay,hesaidthathisvision to the upliftment of women is inspired withGandhi jee.Gurjarraised the issues of drinking water , financial support, and civic amenities for Hatundi, later minister announced to resolve Gurjar shared in brief about Hari Bhau “Hari bhau was born in 1892 at Bhaurasa village in present-day Dewas ofMadhyaPradesh.In1952,hewaselectedtotheAjmerLegislativeAssemblyfrom Shrinagar constituency as an Indian NationalCongresscandidateandbecame the Chief Minister ofAjmer state from 24 March 1952 to 31 October 1956. He was elected to the Rajasthan LegislativeAssembly in 1957 from Kekri constituency and served as the Finance minister in Rajasthan government from 1957-62. He was re-elected to the Rajasthan Legislative Assembly from the same constituency and served as theEducationMinisterinRajasthangovernment from 1962-67. He was awarded Padma Bhushan in 1966.He died on 25 August 1972.” Vi c e -Ch a n c e l l o r Pr o f. S.S. Sarangadevot welcomed guests and hatundiries for their support and presence. Several dignitaries including former MLA Mahendra Singh Gurjar and RamnarayanGurjarwerepresentonthe occasion. The Medical Minister also offered Haribhau Upadhyay Women's College and village in his tour of Hatundi. The college administration demanded water from the Bisalpur line. Dr. Sharma instructed the departmental officers on the spot to start work immediately by making proposals. Similarly, on the demand for a 100 ftroad in the village, he asked the officials of the department to start work. On the demand of Anganwadi center in the college, he said that action will be taken after consulting the officials of the state and central government.