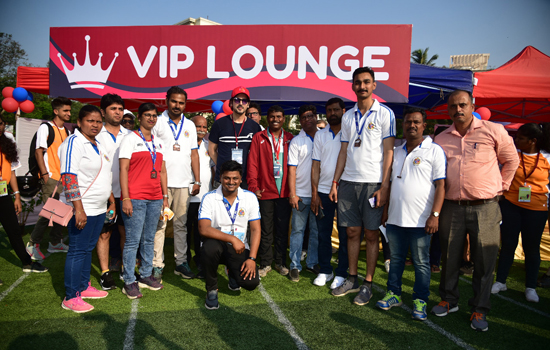 Actor Zayed Khan was seen appreciating Vishwas Mote – Additional Commissioner of K-West ward at the Parinee Juhu Half Marathon. Mote, who himself is a seasoned marathon runner, commended the actor for making his presence felt and boosting the morale of every marathon runner present.

In a public address shoutout to the audience and residents of the K-West ward, Zayed Khan began with praises for Mote for the fabulous job he was doing of keeping the citizens aware of their responsibilities towards their locality! “As you can see, I’ve been living in Juhu all my life. In the last 5 to 10 years, I’ve seen a drastic change in the way the BMC is taking over sanitation, road clearances, accessibility of civil amenities. This will not be possible without the participation of every resident. Do your bit to help the BMC raise awareness of the good work that they are doing,” adds the actor who earned critical acclaim and fame for his role as ‘Lakshman "Lucky" Prasad Sharma’ in the Shah Rukh Khan starrer Main Hoon Na.

Vishwas Mote, along with Zayed, also ask the citizens to visit the BMC website and participate as this would be a great assessment for the BMC as well as their locality. “The BMC operates throughout the journey of a person’s life, right from his birth in a hospital to birth registration, schooling, water supply, marriage registration etc.,” signifying the operations of the local civic body,” says he.

“I appeal to the citizens of Mumbai to segregate waste for easy disposal. We are trying our level best to improve. All we ask for is public participation,” says Vishwas Mote with Zayed having the final word. “One can see just by the cleanliness around, it’s come leaps and bounds ahead as compared to the times when we were children.”